More than 75 years a supplier to the fishing industry.

Thomas Frydendahl founded in 1933 the Frydendahl company starting up in a tree house on the fishing harbour of Hvide Sande. Hvide Sande harbour was established in 1931.

In 1961 Thomas Frydendahl passed away and from 1969 the 3 sons – Mogens, Jens and Lars Frydendahl and a partner Vagn Kristensen continued, the business.

Hvide Sande fishing harbour developes over the years so did the business of Frydendahl.

In 1972 Denmark entered the Europe Union and from then regulation of fish stocks took place by a quota system. The free fishing disappeared and little by little the number of fishing vessels was reduced. By this, the business fundamental of Frydendahl also was reduced.

In 1985 Frydendahl purchased Sigfred Hau`s braiding company situated in Løgstør and moved the activities to Hvide Sande and continued the braiding activities under the name Hau Nylon.

A few years after Frydendahl also purchased Th. Ørbech and sons – established in 1889. A company with a good reputation

Frydendahl then established a wholesale department under the name Ørbech en Gros, in order to operate mainly in the Scandinavian market Norway, Sweden and Denmark as wholesellers.

In 2006 Frydendahl again purchased a company which also operated in the fishing industry in Denmark – Daconet situated in Skive.

Daconet brought as well a large group of customers, skilled employees and a wide range of fykes and equipment into the Frydendahl group.

In this way Frydendahl has developed from a small treehouse to an international company with production of fishing nets, fykes and other equipment in as well Malaysia and Estonia.

In our webshop, you will find Northern Europe's largest selection of fishing articles for both commercial and hobby fishing.

Since 2006, Daconet has been part of The Frydendahl group.
In 1934 Johannes Dahl founded his grocery store with eel roses and fishing nets on the Limfjords island of Fur.
The same year, Thomas Frydendahl founded his general store in Hvide Sande on the west coast of Jutland.

The merger has, as mentioned, meant a wide selection of fishery products, a large part of which is produced at our factories in both Malaysia and Estonia.

On our webshop, you will find our new catalog with all our large product range of fishing nets - mounted as well as unmounted, racks, hooks, drawers, clothing, paint, and much more.

We look forward to hearing from you! 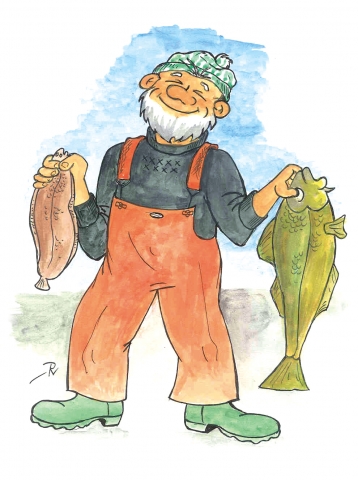